I am delighted to share that my poem 'One Last Ride' was published by Perhappened Magazine in their first issue The team made the decision to keep this issue password-protected for the first week of its release. However, the password will be given to any non-contributors who have shown proof of donation or signed petitions/email chains in the name of Black Lives Matter!

My poem, and the other works in Issue One, can be found here: https://www.perhappened.com/issue1carnival.html

Thank you so much for your continued support of me and my career.

Have a great day,
And remember!
Per Ardua Ad Astra!
- Imogen. L. Smiley!
Posted by Imogen L Smiley at 10:30 No comments:

Today has been a great day! I recently finished a short story, written in the stream of consciousness style, paying attention to thoughts, concerns etc. about the state of affairs amidst the coronavirus pandemic. I paid attention to buying habits, buyers remorse and financial concerns, telling the story of a girl called Abby as her siblings and father spend their savings to keep themselves entertained while in lockdown, while she is just grateful to have a positive bank balance.

This story was published today by Pendemic, a literary magazine / blog hybrid with a goal to document experiences during the pandemic. It is available to read at the link below.

Thank you all so much for supporting me and my craft, especially in times like now. I am grateful to you all for your continued support.

Today, my review of Dave Eggers' The Circle was published by Essex Book Festival! The festival was unable to continue its events due to the coronavirus pandemic that struck the UK, and they cancelled the final few events remaining prior to the UK lockdown. I was contacted directly by the festival, as I had applied to volunteer with hope I would provide a review of something I had read recently. You can read my review at the link below, where you can also support Essex Book Festival.

Thank you so much for supporting me and my journey as a writer. I am so grateful to you for reading!

And remember,
Per Artdua Ad Astra!

I'm so happy to share that my poem, entitled Deforestation has just been published on the Trick Magazine website! This piece was really fun to write, I loved getting to explore double-meanings and metaphors within it. You can read my poem here:
https://www.trickzine.com/post/deforestation?fbclid=IwAR2y5JnpIWdJlUmGFBZFwCMhvNa61Fj6rVl9KDFf7Erk03Bioa8-w5O-cMQ

Thank you all for supporting my craft thus far!
And remember:
Per Ardua Ad Astra
- Imogen. L. Smiley

Today, 7/4/20, is the next instalment of University Inspired Writing Prompts. Since my first year at university, I have been compiling a collection of writing prompts inspired by my time studying in Derby. I hope that these prompts help you create your own works!


All of these prompts are dialogue based, and are inspired by real conversations I have been part of whilst at university.

Today is especially special as it marks the fiftieth week that I have shared a writing prompt inspired by my university experience! I'm so glad that this segment has been around for so long, I really enjoy sharing these quote prompts with you all!

"Someone just sent a glass of milk to our table? Do we have to pay for this?"

I'm sure many of you have heard of the joke of posting your table number and location on social media in order to get friends and followers to order food and drink for you at establishments like Wetherspoons. However, this wasn't one of those scenarios.


This actually happened on New Year's Eve. My friends and I were out at a Wagamamas celebrating a friend's 21st birthday before the night transitioned into a New Year's party. While we were waiting for our meals, a server came over with our drinks, which were varied, especially in such a large group. However, there was one drink which didn't belong on our table: a half-pint glass of milk, which had been ordered to our table by someone that was not us.

Another patron at the restaurant had ordered us this milk, and billed our table for the milk! It was madness!

I hope that this prompt inspired something, even if it was just a smile! Feel free to check out my previous prompts by looking through the hashtags below!

Thank you so much for reading!

Hello and welcome back to Favourite Character Praise Friday! This is one of my absolute favourite posts to write and I hope you enjoy my picking apart of my favourite characters enough to stick around while I examine my next victim, I mean, character. Don’t worry, I do not rank these characters in a particular order, it just so happens that some characters are better worth sharing praise for at a different point in time to others! Remember, every fifth instalment is Least Favourite Character Praise Friday, so keep an eye out for me probing at characters I can’t stand and raving about how well they were written in order to evoke such a reaction.

So, who is the subject of my next Favourite Character Praise Friday?

Shintaro Midorima from Kuroko No Basket / The Basketball That Kuroko Plays! 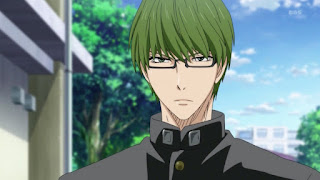 Warning: This will contain spoilers!

For those who aren’t the most familiar with this series, it follows a group of basketball prodigies that were all on the same team in middle school, that all decided to split up and attend different high schools for their own benefit. The main character Tetsuya Kuroko is the sixth former member of this powerhouse team, who just wants to continue to play his favourite sport. Meanwhile Taiga Kagami has just joined a new school and is looking to continue playing his favourite sport as well. They, both being enrolled at Serin High School, join their club and Kuroko, having recruited Kagami, seeing him as a person with enough potential to overpower his previous teammates: Kise, Midorima, Aomine,  ((arguably, also Momoi)), Murasakibara and Akashi begin their mission to face each of them on the court. Kuroko has the goal to bring back forth the honest and genuine personalities of his friends that have been consumed by their immense potential and subsequent egos. Kagami’s goal is to beat each member of this powerhouse team and become the best player in the High School circuit.

This is a show I didn’t initially expect to get invested in. But after watching the characters learn and grow throughout the first two seasons, I was on the edge of my seat, counting down the three months between my watching it, to the new season.

The first thing that drew me to Midorima was how drastically different he was from his previously-introduced Generation of Miracles counterparts, Tetsuya Kuroko and Ryota Kise. While it made sense for Kuroko not to care much about the esteem that came from being a member of this powerhouse team, Kise’s ego was much more understandable. It was made out that each of the members would be prideful from the get go. What I hadn’t expected was for Midorima to take himself so seriously and yet still present himself in such a ridiculous manner to ensure victory. Midorima is a religious believer in the power of horoscopes and lucky items. He believes in divinity and a higher power, feeling that he has been given such a great power in a field he is passionate about and is adamant he uses it. Midorima, therefore tapes the fingers of his left hand to keep them from being hurt during daily tasks and also carries a lucky item, each and every day, regardless of how random it might be. When he is first introduced, he approaches his former teammate, Kise after he lost a practice match to Kuroko’s team. He’s wearing his school uniform impeccably, without a speck of dirt on him, with his fingers taped, holding a ceramic frog that he has affectionately named Kerosuke or, even Mr Froggy in some translations! He carries himself as above other people, rigid in posture and cool and collected in tone and disposition.

The next reason I adore him would be how diligent he is to his sport. He understands that he has gained a great skill in basketball, with a range that expands across the entirety of a full-court match. He respects his own limits and does his best to learn how to expand them. Midorima is a hard-working player and strives to better himself and improve. When the team in middle school began to break down, with members refusing to attend practice due to already being the best of the best, with or without excessive efforts, Midorima is shown continuing to practice and hone his skills. During middle school, he unlocks what is referred to as his full potential, when he shoots his first basket from the opposite basket, and when he lands the shot, he realises that he needs to master this incredible skill.

The last reason I’d like to discuss here is how he feels about Takao. This isn’t a post about romantic dynamics, despite being a huge fan of them as a pairing. No, this is about what is canonically expressed in the source material – Midorima trusts Takao more than he was shown to have faith in any other character. When he and his team originally lost to Serin in Season One, he realised something, what Kuroko was trying to teach his former teammates. You cannot be the best player in Japan without having complete and total faith in your teammates to assist you. After all, without a team, nobody’s going to pass the ball to you. He understands this and from that point learns to interact and socialise with his teammates and learn to trust their own abilities playing. This leads to the ultimate tactical move, constructed solely to keep Akashi, the most destructive player from the former team, where Kazunari Takao would acquire the ball and throw it to Midorima, who was already jumping, ready to receive it, and shoot. It gave them a great chance of beating him. And after he thwarted Midorima and his team’s attempts, he was in tears, the team swore that they would beat him next time. The fact that this effort wasn’t just him and him alone, but Takao too, and the other four members of Team Shuutoku. I love how his character has developed in such a way!

Please, if you have opinions on Shintaro Midorima, feel free to share them with me! Don’t forget you can check out my previous Character Praise by looking through the hashtags below.

Posted by Imogen L Smiley at 11:38 No comments:


I'm so happy to share that my poem, entitled Elara has just been published Issue III of Ang(st) Magazine, an issue focused on the theme of Skin! This piece was really fun to write. You can read my contribution, as well as the amazing work of the other artists here:
https://angstfzine.com/portfolio/issue-iii-april-2020/

Thank you all for supporting my craft thus far!
And remember:
Per Ardua Ad Astra
- Imogen. L. Smiley